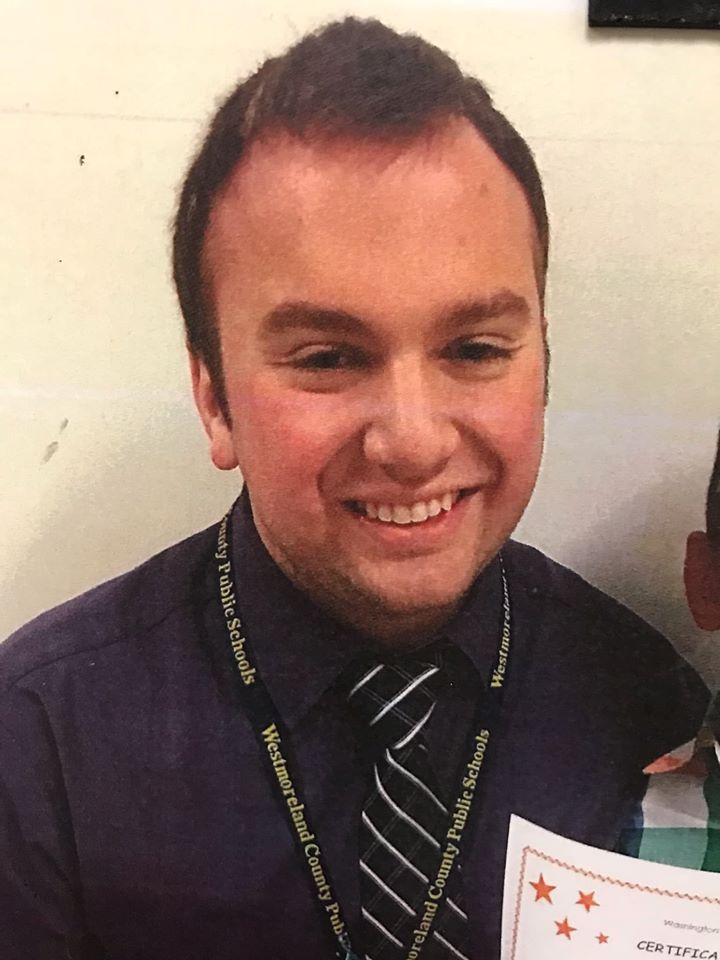 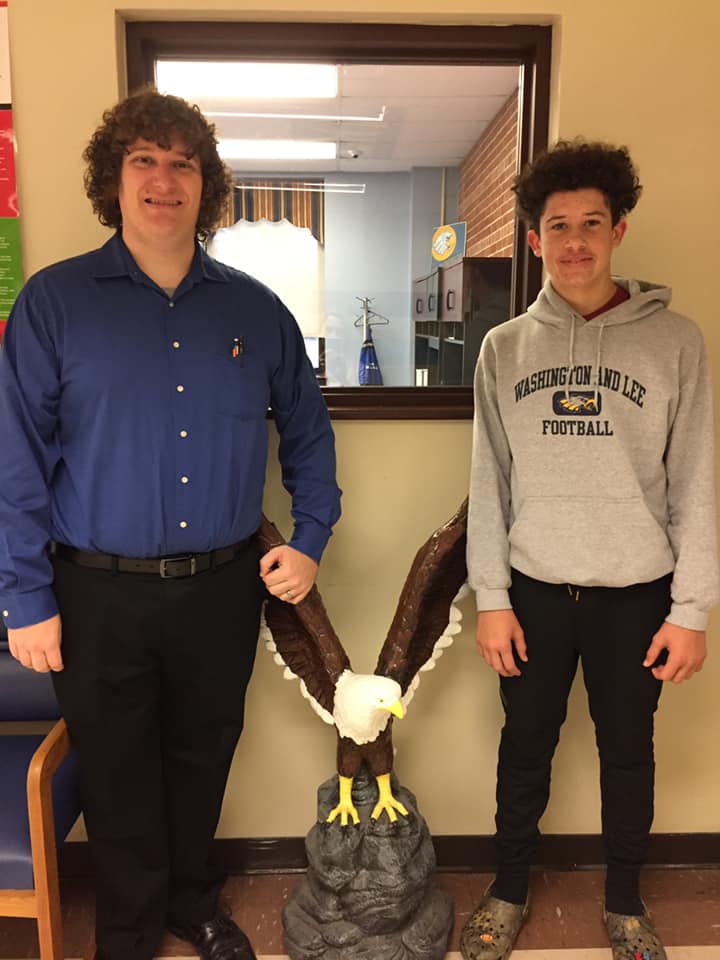 Since 1964, Virginia has participated in the National Teacher of the Year program.  Open to all teachers in pre-kindergarten through grade 12, school counselors, librarians, and reading specialists, each applicant must hold a current renewable Virginia teaching license.  Candidates are selected for dedication, knowledge of subject, and teaching skills.  The carefully chosen teachers must show that they have the respect of their students and parents. They should also have an active and meaningful role in the community as well as the school. Westmoreland County Public Schools nominated teachers exceed all the expectations. They are a diverse group consisting of a music teacher, a school counselor, a Kindergarten teacher, and a Special Education instructor.  The 2020 School Teachers of the Year are Bruce Passaretti, Montross Middle School; Matthew Freno, Washington District Elementary School; Tamatha Williams, Cople Elementary School and Shawnna Stone, Washington & Lee High School.

In his nomination of Bruce Passaretti, MMS band and guitar teacher, principal William Bowen notes that “Mr. Passaretti’s passion for music is undeniable. He displays this passion each year when he transforms a group of fifty to sixty wide-eyed novices into an award winning band. Note by note and chord by chord, he builds a musical foundation for each student.”

Mr. Passaretti came to MMS in the fall of 2016. One of his first goals was to increase the student participation percentage. Since that time he has increased the band from 28% to 36% of the student body and he currently has 50% of the sixth graders enrolled in band. Since his arrival, the level of musical performance at MMS has increased in many ways.  The band has received ratings of Excellent and Superior at various events. In 2019, at the Music in the Parks in Maryland, the MMS band won first place in the small school category and first place overall beating schools more than twice the size of MMS.  In 2020, Mr. Passaretti took a record breaking fifty students to audition at the Area Honor Band.  Twenty-four MMS students secured a spot on the Honor Band.  He also created the MMS Eighth Grade Eagles Marching Band, who performed at the Montross Fall Festival parade and at the high school homecoming with the W&L marching band.

Mr. Passaretti wrote in his education essay,” Everything I do with my students relies on my rapport with them. In order to participate to the fullest extent in any subject, especially one as emotionally vulnerable as music, the student must have confidence and trust in the teacher.  I talk to my students directly, but politely.  I take time to learn about their personal lives and hobbies which can be time consuming considering the large number of students in band. I make a point to say good morning to the students as they walk past me during hall duty, say hello as they come into a classroom and say have a nice day when they leaving. Showing the students this level of respect opens the door for interactions that show you care about them as people and not just as students.”

Matthew Freno is the school counselor at Washington District Elementary School.  A dedicated staff member of five years, Mr. Freno has interwoven his skills to ally with the many needs of an elementary school leader.  The staff and administration have recognized Mr. Freno as the “go-to” person for teachers who are having behavior issues with a student. He offers guidance not only to students but to the teacher with behavior intervention plans and the ability to interact with each students successfully. Sandy Herdle, WDES principal, said, “I very recently told Mr. Freno that there is no one person who influences this building more than him.  He is truly a part of everything that happens here at WDES just because folks rely on him for his professionalism and integrity.”

Mr. Freno’s journey in education began with his matriculation at Slippery Rock University in Pennsylvania.  While there, he discovered the field of Psychology and after graduating he earned a Master’s in Counseling at Indiana University of Pennsylvania.  His practicum was at a school district in Pennsylvania where he learned what it was like to work in an elementary school.  This invaluable learning experience helped him bring his ideas and training to Washington District Elementary School in 2015. He notes that “working at Washington District Elementary School has shaped his perspective as a counselor more than any other factor in his previous experience. “Mr. Freno credits this growth to the trust his administrators have given him over the years. He has learned to be flexible and how to prioritize what is more important in doing his job.

During this time at WDES, Mr. Freno has had many successes, many of which he attributes to great collaboration with the staff.  Working with various teams, Mr. Freno has been successful in the implementation of the Safety Patrol, Student Mentor Program, the annual Harvest Carnival, a Student Advocacy Program, and the work of the Owleus team. One of his goals was to help define a culture where students and staff work together and are proud of their school.  As he notes, “relationships are the most important tool we have, but more than that, they are the best part of being an educator.

An educator for three years, Mrs. Tamatha Williams is the Teacher of the Year for Cople Elementary School.  Currently serving as a Kindergarten teacher, she was nominated by her peers and principal Leslie Steele. Ms. Steele noted in her nomination letter, “Mrs. Williams works closely with her colleagues to provide authentic learning experiences for our students.”  She serves on the Kindergarten Team, Math Committee, and Literacy Committee.

An avid learner from an early age, Mrs. Williams stated in her biography that her parents exposed her to many learning opportunities.  She eloquently notes that “each season held its own class on plant growth, cooking, teamwork, and animal care. While on vacation, favorite stopping points were civil war battlefields, historical sites, relatives, and camping.”

She, too, was influenced by favorite teachers in school. Mrs. Williams cites Ms. Acorns, Ms. Fagan, and Ms. Twiford.  They each helped her explore education and the love of teaching.  Over three decades Mrs. Williams has worked with children from all walks of life.  She worked as a children’s minister at her local church and as a substitute teacher for eight years prior to deciding to recertify as a licensed teacher. This is her first year at Cople.

Mrs. Williams see her role as a “guide to channel their (children) learning by providing a place where students feel valued, respected, and challenged.  She sets high expectations, provides appropriate support, and encourages her students to take ownership of both their successes and failures.”

At Cople Elementary, she collaborated with fellow Kindergarten teachers and community members for the Community Helpers PBL program.  One of the highlights was having an interactive slide show about farm equipment and learning about local farmers and the raw materials that they use.  The students also met with a waterman who showed the students what tools he uses to fish and harvest crabs.  As Mrs. Williams notes, “These are examples of meeting students where they are, connecting them to their community, and propelling them forward to thrive and enjoy learning.”

Roger Coleman, principal of Washington & Lee High School nominated Shawnna Stone as W&L Teacher of the Year.  In his nomination he states, “Ms. Stone goes out of her way to elicit feedback from her students, inviting them to share their experiences not only daily, but also at the end of the semester in order to make changes and improvements with instruction.”

One of the highlights of her teaching career has been the learning of Project Based Learning.  As she noted in her biography, “A student’s vignette she filmed about PBL’s impact in the life of a student with special needs made it back to PBL Works, and that has been a defining moment in her teaching career.”

“I believe developing a rapport with students helps to ensure that education transcends the classroom. Students who feel valued and appreciated will want to learn inside and outside the classroom.”